During this uncertain period that ‘Auschwiz. Not long ago. Not far away’ exhibition and the Museum of Jewish Heritage — A living memorial to the Holocaust, where the exhibition is hosted, are closed, its mission to spread the lessons of the Holocaust remains more important than ever. Therefore, we will make a closer approach to some of the artifacts part of the Auschwitz exhibition and the meaning behind them.

The Auschwitz exhibition brings together more than 700 original objects of great historic and human value, from more than 20 institutions and museums around the globe. These objects are direct witnesses of the horrors of Auschwitz and the Holocaust that serve as the guiding thread of a rigorous and moving account on the history of the camp.

Under the Shadow of Auschwitz

Before Auschwitz, Oswieçim was an ordinary town of southern Poland, 50 km away from Kraków. Today it is primarily known as the site of the darkest tragedy of the 20th century, the town that Nazi Germans named Auschwitz.

More than half of the population of Oswieçim was Jewish—8,000 of 12,000—, and by the beginning of the 20th century there were more than 10 synagogues and prayer houses in the town. For centuries, the Great Synagogue of Oswieçim was the epicenter of the Jewish local activity.

On the night of November 29, 1939, following the occupation of Oswieçim by German Nazis, the Great Synagogue was set on fire and destroyed. On June 2004, 65 years later, a team of archeologists from the Nicholas Copernicus University in Toruń, led by Małgorzata Grupa, discovered several dozen elements such as candlesticks and chandeliers part of the furnishings of the synagogue, buried at the site without any covering. Most of the objects were bronze and came from late 19th century, around 1890. The artifacts were taken to the Auschwitz Jewish Center (AJC) to be properly conserved.

Today, some of these artifacts are part of the ‘Auschwitz. Not long ago. Not far away’ exhibition as part of the explanation of the life before the Holocaust in the town of Oswieçim and the importance of Judaism on its character. 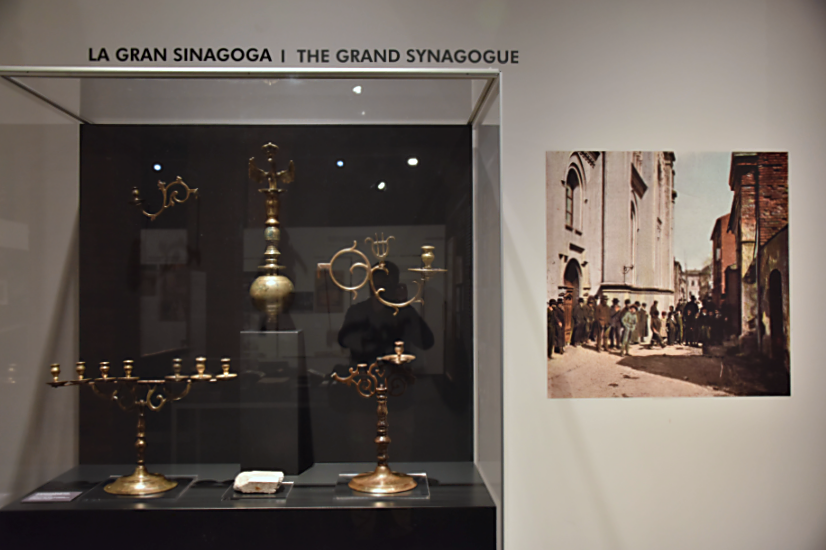 In September 2000, the Auschwitz Jewish Center opened its doors to honor the former residents of the town and to teach future generations about the destruction caused by the Holocaust. The Auschwitz Jewish Center (AJC) is the only Jewish presence in Oświęcim and since 2006, has been part of the Museum of Jewish Heritage – A Living Memorial to the Holocaust in New York.

The Center’s facilities include the Jewish Museum, the Chevra Lomdei Mishnayot Synagogue, the Education Center and Café Bergson.

Part of the permanent exhibition of the AJC is a letter, loan of Mirosław Ganobis, of Alfons Haberfeld to Mr. Sagan (1945) asking for a report on the situation in Oświęcim and on the Haberfeld factory and family home at the end of the war. 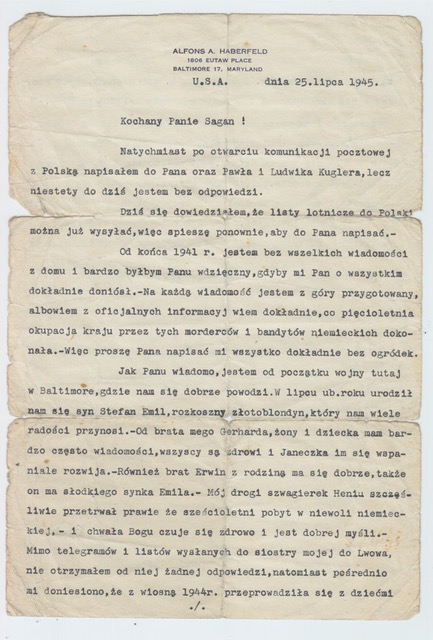 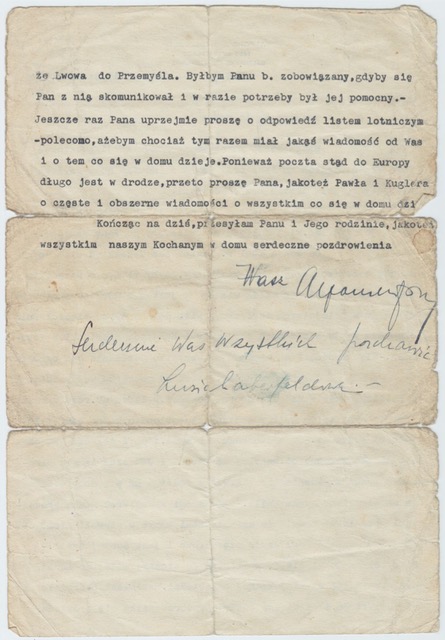 The letter also informs that Alfons’s brothers Erwin and Gerhard and his brother-in-law Henryk Thieberg survived the Holocaust. Alfons (1903–1970), together with his wife Felicja (1911–2010), left for the World Fair in New York in July 1939. On their way back, due to the outbreak of war, their ship was diverted to Scotland. In the beginning of 1940, they settled in the USA.

In occupied Poland, the Haberfelds left their daughter, Franciszka Henryka (b. 1937), under the protection of their family in Kraków. In 1941, the girl was imprisoned with her relatives in the local ghetto. Franciszka’s grandmother took care of her. When she learned that the Germans would soon come to arrest her, the grandmother hid Franciszka in a cellar with coal. However, when the Germans came to take her away, the girl began to cry thus revealing her hiding place. Both were deported and murdered in the extermination camp in Bełżec (1942).

Visitor access to the core exhibition “Oshpitzin. The Story of Jewish Oświęcim” remains uninterrupted thanks to the Google Arts & Culture online platform. The most interesting objects from the collection of the museum, including unique pre-war archives and archaeological excavations are available along with descriptions in Polish and English can be viewed at home on the computer screen and smartphone at https://www.ajcf.pl/online-exhibition/.

The Jewish Museum in Oświęcim is famous for its programs. The current iteration of the Anti-discrimination Education Academy has just been transformed into an online course due to the pandemics of COVID-19.

Dr. Artur Szyndler, Senior Project Expert and Chief Curator of the Auschwitz Jewish Center adds: “We have also decided to share the experience of conducting remote education with teachers from all over Poland, who in the current circumstances have to take up the challenge of teaching all children and young people via internet. We have launched a special Facebook group to facilitate adoption of Google Classroom for teachers who seek a reliable tool to teach online.”

Dr. Artur Szyndler works as a Senior Project Expert, Chief Curator, Curator of the Core Exhibition “Oshpitzin. The Story of Jewish Oświęcim” at the Jewish Museum in Oświęcim | Auschwitz Jewish Center. Mr. Szyndler holds a graduate degree in Religious Studies at the Jagiellonian University in Kraków. His focus is the history of the Jewish community of Oświęcim and Polish Jewry in general. He is also a member of the Polish Association for Jewish Studies. His publications have been featured in “Auschwitz Studies,” “Pro Memoria,” “Karta,” “Studia Judaica,” and “Yad Vashem Studies.”